Pre-screen notification:  1-2 weeks after the submission

Following the success of the first (ESEPCE 2020) and second (ESEPCE 2021) conferences, The theme of the former International Conference on  Energy Saving and Environmental Protection and Civil Engineering (ESEPCE) will be changed to the International Conference on Energy Conversion and Renewable Energy Research (ECRER) in 2022. It's to remove the theme of civil engineering and aims to focus on the latest innovations and knowledge in renewable energy and to stimulate new ideas and collaborations.

The 3rd International Conference on Energy Conversion and Renewable Energy Research (ECRER 2022) will be held in Changsha, China, from April 22-24, 2022. The conference will focus on the latest related research and serve as an international platform for scholars from home and abroad to share experiences, expand professional networks, exchange new ideas face to face and present research findings.

ECRER 2022 welcomes original and unpubliahed manuscripts. All manuscripts invited or contributed, will be reviewed by two or three experts from the committees. After a careful reviewing process, manuscripts should be submitted to journals which are EI compendex indexed. The journal will give final decision for the submitted manuscripts with review reports.

Note: All submitted articles should report original, previously unpublished research results, experimental or theoretical. Articles submitted to the conference should meet these criteria and must not be under consideration for publication elsewhere. We firmly believe that ethical conduct is the most essential virtual of any academic. Hence any act of plagiarism is a totally unacceptable academic misconduct and cannot be tolerated. As the capital of Hunan Province, Changsha is the center of the province in terms of politics, economy, culture, education, transportation, communication, finance, business and information. Under its jurisdiction are one city, three counties and five districts. They are Liuyang City, Changsha County, Wangcheng County, Ningxiang County and north, south, west, east and suburb districts. Changsha City lies in the northeast of Hunan Province, at the lower reaches of the Xiangjiang River. The Xiangjiang River runs from its north to south. North of the Dongting Lake and south to Hengshan Mountain, it was once called the lips of Hunan and Hubei, the throat of Guizhou and Guangdong. Changsha is a beautiful city in South China with many hills, rivers, lakes, pains, lakes and cities. 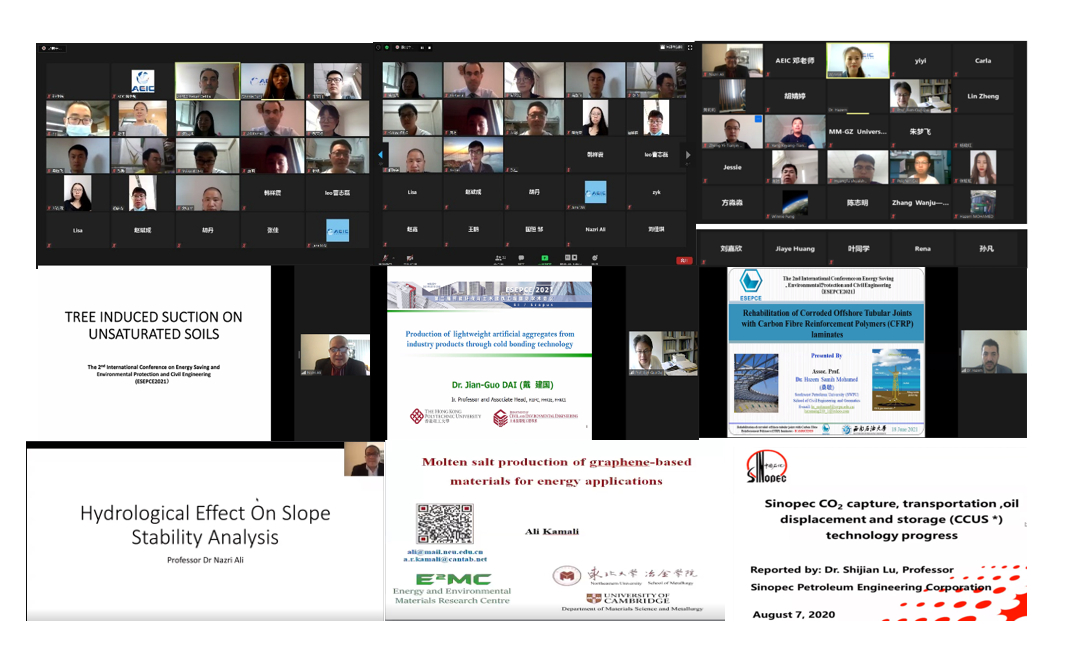 ESEPCE 2021 was successfully held online on June 18, The conference changed to online due to COVID-19, The conference is honored to invite Prof. Nazri bin Ali from Universiti Teknologi Malaysia, Prof. Jian-Guo Dai from the Hong Kong Polytechnic University and Assoc. Prof. Hazem Samih mohamed from Southwest Petroleum University, Many thanks to the experts and scholars for their support to the conference. ESEPCE 2020 was held online and attended by scholars from domestic and international professional fields. The conference was held to promote the industrialization of academic achievements and create a more professional platform, while providing the audience with the opportunity to exchange new ideas and application experience with the keynote speakers face to face.